You are here: Home » Blog » Uncategorized » Using the Jewish ‘Toolkit’

Barbara Bullman has led an accomplished life. The Rockville resident is a celebrated attorney, earning several awards for her expertise in Elder Law. But despite a loving family life, a vibrant social life and a thriving career, something was missing.

“I knew nothing about my Jewish identity,” Mrs. Bullman admitted. “Judaism is a part of who I am as a person, but I don’t know what it means to be Jewish.”

Like many modern Jews, Mrs. Bullman grew up in an observant household. The Bullman’s attended High Holy Day services as a family and celebrated other holidays – such as Passover and Shabbat – in their New Jersey home. Her father, brother, and son all became B’nai Mitzvah, though she never came to the bimah as a Bat Mitzvah, nor did she receive any formal Jewish education.

Yet, despite her long-standing sense of Jewish connection and belonging, Mrs. Bullman felt there were missing pieces in her Jewish knowledge – gaps she had always wanted to fill. With her well-deserved retirement quickly approaching, Mrs. Bullman knew the time had come for a journey into Jewish life.

“I want to learn about Judaism not only as a religion but also as a culture,” she said. “I’ve attended many services and educational lectures at local temples. I’ve taken courses on Shabbat and Torah study, but the material was so advanced. The other students had been to classes before. The questions they asked were beyond my knowledge.”

Rabbi Gil Steinlauf understands Mrs. Bullman’s perspective. For many Jews today, a perceived sense of inadequacy is the most significant barrier to feeling a connection to Judaism.

“We still haven’t solved the core of the problem: the culture of mainstream American Jewish life still communicates that there’s an in-crowd and an out-crowd,” Rabbi Steinlauf explained. “Just as we teach when we take up the Lulav and Etrog on Sukkot, the Jewish people are an agudah achat, a single group that includes both knowledgeable and non-knowledgeable Jews as equals.”

Rabbi Steinlauf’s solution to Judaism’s inaccessibility problem is Jewish Life University, a program offered by Kol Shalom Congregation in Rockville, MD, and designed for those in the greater-Washington D.C. region who seek to discover how to use the Jewish toolkit.

“I registered for Jewish Life University because, in my heart, I know how important Jewish identity is, but without a class like Essentials of Judaism, I wouldn’t have the tools to fully express my identity,” Mrs. Bullman said. “This course is ideal for someone like me, who wants a foundation from which to learn more about Judaism and embrace their Jewish identity at a beginner’s level.”

Mrs. Bullman hopes to expand her Jewish literacy, as she confesses that her more observant friends have a stronger working knowledge of Jewish culture, tradition, and ritual practice.

“I can’t read Hebrew, so I struggle to follow along during services,” she said. “I try my best to follow along with the English translation, but I feel as if I’m missing something. I feel left out.”

Naturally, those Jews who grew up going to day schools and Jewish camps, who regularly visit Israel, who have read Hebrew since childhood and know their way around the siddur seem to be the individuals with the most significant voices and influence across all Jewish institutions.

“Judaism is a 3,000-year-old tradition of knowledge, values, practice, and learning, so the earlier you start, the more comfortable you are,” Rabbi Steinlauf said. “But here’s the rub: the knowledgeable Jews shouldn’t be the only ones at the table. Those with less Jewish background must also be empowered to chart the course of the Jewish future as well.”

Ensuring the continuity of Jewish identity resonates with Mrs. Bullman. “I worry about the next generation of Jews. I don’t want our culture to be lost. It needs to survive,” she said.

From Rabbi Steinlauf’s perspective, the preservation of Jewish identity requires a dramatic reconception of synagogue life: “We do not expect membership in a synagogue or other institution to participate in Jewish Life University. It is, instead, an act of goodwill toward all Jewish people, and it is here as much to educate as it is to articulate a culture shift from within the walls of a synagogue: we’re not here just for our ‘educated’ members. We’re here for anyone and everybody.”

Such an inspired approach to Jewish education is refreshing to Mrs. Bullman.

“Jewish Life University is the best thing a synagogue can do for the Jewish people,” Mrs. Bullman said. “A course like Essentials of Judaism is a wonderful example of what’s possible when you make Jewish topics interesting, approachable, and accessible to everyone, no matter your background.”

“I’m very excited about this experiment in shifting cultures and upending paradigms of Jewish engagement and connection,” Rabbi Steinlauf said. “If all goes well, The Jewish Life University won’t just be a synagogue program. It will be an incubator of empowered Jews who, once and for all, can overcome their paralysis, find Judaism on their own terms, and be plagued by inadequacy no more.” 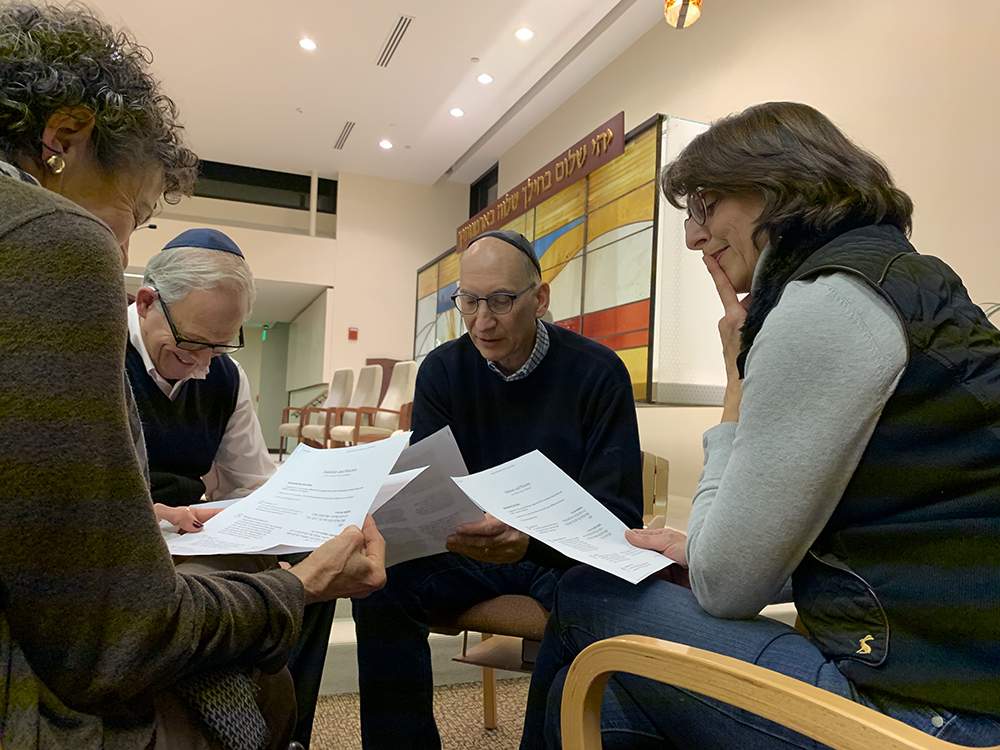