You are here: Home » Blog » Uncategorized » How to Thrive in the Age of Misinformation

How to Thrive in the Age of Misinformation

What is truth, and how do we recognize it?

In the age of ‘Fake News,’ when factual information is routinely manipulated and weaponized, it’s a question that can have life-or-death consequences.

Rabbi Gil Steinlauf seeks to answer this question – one he calls the most pressing issue of our time – in the next installment of Kol Shalom Congregation’s Jewish Identity Institute series: “How to Thrive in the Age of Misinformation” (March 15, 2020, at 7:30 pm).

“Torah values help us make sense of the world,” explained Rabbi Gil Steinlauf, Senior Rabbi at Kol Shalom Congregation and founder of the Jewish Identity Institute. “Every day, we all have to decide what we believe is true, but that has never been harder.”

“Is absolute truth knowable? Perhaps not,” Rabbi Steinlauf pondered. “But Judaism believes in the existence of absolute truth. Our tradition instructs us to live as truthfully as possible, while still accepting human beings are imperfect.”

So what is an intellectually disciplined Jew to do when objective facts are less influential in shaping public opinion than appeals to emotion and personal belief?

“We must have the courage to ask whether or not something is true, rather than merely accepting a ‘truth’ that has been told us,” Rabbi Steinlauf instructed. “That’s the basis of Rabbinic Judaism: constantly asking the critical questions, never accepting something at face value.”

The phrase Torat Emet (“Torah of Truth”) implies that truth exists in its own right. Indeed, the Torah says that emet (truth) is ascertainable. Human beings are more than capable of distinguishing emet from sheker (falsehood).

“Jewish tradition values critical thinking,” Rabbi Steinlauf said. “It flows from countless generations of Jewish intellectuals who questioned and evaluated their world, taking nothing for granted.”

Even the most learned Torah scholars accepted the possibility that what they had formerly known to be true, may actually have been distorted by human fallibility. The brilliance in their wisdom is that they left room for doubt.

“Life shows us that the people we need to fear most are those who think they know all there is to know about something,” Rabbi Steinlauf suggested. “The smartest people are those who worry they don’t understand enough – ever. I suppose that means that we Jews are very, very smart!”

Rather than a roadblock to faith, Rabbi Steinlauf argues the Jewish people greatly benefit from diversity.

“The truth can be a tool to incubate and revitalize Jewish identities,” he said. “Previously marginalized populations of Jews – including LGBTQ, interfaith families, Jews of color, and Jews with disabilities – speak their truths, and we must embrace their perspectives.”

Yet it’s not only those on the fringes of the Jewish community who are afraid. Given the resurgence of antisemitism, Jews of all backgrounds may choose to keep the truth of their Judaism under wraps.

At such a time, the idea of truth as a divine value can bolster the Jewish people.

“As Jews are called upon to be moral leaders, we must lift up the truth,” Rabbi Steinlauf said. “It can be helpful to look at Judaism as a tool that you can use to thrive in the age of misinformation.”

At Rabbi Steinlauf’s March 15th talk on Torat Emet, attendees will receive just that: a field manual for resisting mendacity. As the Torah says: “Distance yourself from words of falsehood” (Exodus 23:7).

“When there are lies, justice is not possible,” Rabbi Steinlauf said. “To be a Jew, therefore, is to be hypervigilant about lies, to call out falsehood whenever it arises, to stamp out corruption. The very healing of the world depends on our being a people of truth.”

Rabbi Gil Steinlauf and The Jewish Identity Institute at Kol Shalom Congregation present “Torat Emet: How to Thrive in the Age of Misinformation” on March 15, 2020, at 7:30 pm. The event is free but registration is encouraged. To RSVP or for more information please visit our website. 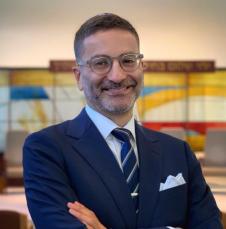