You are here: Home » Blog » Uncategorized » American Jews: It’s Time for Us to Reckon with our American Racism

American Jews: It’s Time for Us to Reckon with our American Racism

When my great grandparents emigrated to America, they never dreamed of becoming a part of the privileged class of Americans.  They only craved safety, security, and a chance to live in freedom.  And certainly, the white American mainstream didn’t see these poor European Jewish refugees as white people–they didn’t even see the Irish, or the Italians as white people back in those days!  But all that began to change in the 20th century, as we came through upheavals, the Great Depression, and the World Wars.  Suddenly, in the Great American Melting Pot, anyone of European descent could make it into white privilege in the so-called American Land of Opportunity.  In our Jewish progression to financial, educational, and professional success in this country, one thing that most of us never consciously acknowledged to ourselves:  Jews who immigrated from Europe were working hard to be accepted as white people in America.

Once upon a time, you would have a hard time finding Jews in the top colleges, in the country clubs, in all the elite places.  Nowadays, we are in all these places.  Once upon a time, the New York Times wedding pages were only for the scions of White, patrician families.  Now, Jewish faces and names are as common as WASPs on those pages.  Immigrant Jews saw an opportunity to make it in America, and by and large we seized that opportunity.  We moved out of the urban ghettos and into the suburban paradise along with the rest of White America, with two-car garages and picket fences.  We bought into the American Dream 100%.  And just like so many mainline churches, American synagogues opened up in the non-redlined suburban white neighborhoods that we gratefully moved into.

Yes, it’s true that Ashkenazi Jews have done amazing things in this society and beyond.  We truly have been at the forefront of so many great movements and institutions that have made the world a better place.  But we can no longer ignore the fact that we were able to do this here because most of us had white skin.  And that made all the difference in the world.

By the time I was born, American Jews had also absorbed much of White America’s attitudes, including its racism.  In my family of origin, I regularly heard some relatives use the word ‘schvartze’ (the Yiddish word for ‘black’) whispered under our breath, and sometimes spoken in a contemptuous tone as if it were the “n” word.  And while many Jews clung to our spiritual roots and fought for the oppressed, and fought against racism and bigotry,  I also remember encountering many Jews who saw black people as inferior, and who reacted to successive waves of non-white immigrants to America with condescension–willfully forgetting their own struggles of just a generation before.  Like many immigrant groups, it is recent immigrants who often take hard-line attitudes to newer immigrants in an attempt to prove their Americanness to themselves and to others.

Whether we were progressive or reactionary, one thing is clear:  the story of Jews in America is that Ashkenazi Jews became accepted as mainstream White Americans.  And this means that we  Jewish people have assimilated and now include the story of American racism as a part of our identity.  In order to make a better life for ourselves here, we readily bought into the American racist paradigm that says that privilege can come–and doors can open–for all people who work hard, who pull themselves up by their bootstraps–so conversely, if you don’t make it in this society it is your own fault:  structural racism is erased from our understanding of our success.   If we white-skinned Jews accept the benefits of privilege, then we must also take on responsibility for the two great original sins of America–namely, the genocide of Native Americans, and the enslavement of Black people, and the subsequent culture of racism that lurks behind all the blessings of American life.  You can’t have one without the other.

And even if, unlike me, you didn’t grow up hearing the word schvartze, and even if you never did a racist or bigoted thing in your life, remember:  we Jews are all in it together.  If one Jew acts in racist ways, then for this sin we must all bear collective responsibility.  It’s the Jewish way.  And the difficult idea that I bring before us is that nowadays we understand something about our human condition that transcends even the Jewish wisdom:  all of humanity is arevim zeh bazeh: we are all, as human beings interconnected with one another.  The reality of our society and our world is that all of us, Jewish and non-Jewish, black and white, all of us must reckon with our responsibilities in bringing about the injustices of the world.  And when we wed Jewish wisdom to our human wisdom, we discover that we can never truly effect justice until we can own up to this collective responsibility we all share for the terrible abuses of our time.

Every time a person of color is singled out and denied the kind of justice available to a white person in our society, we Jews who benefit from this society must say chatanu–we have sinned!  Every time a brown person has their human rights and dignity stripped away by this society, we must say we have sinned!  Every time we bear witness to innocent people needlessly abused or killed and we did not act for the sake of justice, we Jews who at this moment do not experience violence or persecution must say we have sinned.

I am not saying that, as Jews, we necessarily have to take the blame for all of our society’s ills.  Lord knows, that’s exactly what all the anti-Semites want to lay on us!  No, with anti-Semitism is on the rise we must do all we can to protect ourselves from becoming the scapegoats for what’s wrong around us.   I bring these words to show that those of us who are white and successful in this country must recognize that we profited, literally and figuratively, off of American racism.  In this way, Ashkenazi Jews are no different than any other white European immigrant group who profited off of that racism.  No doubt, so many of us struggled hard to achieve what we did, but at the end of the day, having white skin really took most of us farther than we may be comfortable acknowledging.

So now what do we do?  Should Ashkenazi Jews give up all the blessings that we and our parents and grandparents worked so hard to achieve?  Should those of us who are accepted as “whites” take away the opportunities that our children have simply because they might have white skin?  No, of course not.  But here’s what we can do.  We must remember that the Jewish people have inherited a rich tradition of ethics and struggling with the given. We don’t just accept this world and its flaws without questioning why.

We are the people who perennially stand with one foot in mainstream society, and one foot out of it.  What this means is that we must recognize where our feet are planted!  One of our feet is planted in the collective Jewish soul that fights for the sake of life, holiness, knowledge, insight, and most importantly, for justice.  But our other collective foot is planted right here in America. It’s planted in a racist and bigoted system that still has incredible potential to become the great Democracy that our very flawed Founding fathers dreamed of.

When Rabbi Abraham Joshua Heschel marched alongside the Reverend Dr. Martin Luther King, Jr, he famously said, “When I march in Selma, my feet are praying.” Heschel was praying with both his Jewish feet, planted in the timeless holiness of Judaism and in the very flawed present.   Likewise, we must  take the foot that is firmly planted in the brilliant tradition of the Jewish people and step it forward right into this society, the society where so many privileged white folks can’t see past their moral blindspots, where corruption and bigotry seem to have so much free reign these days.  In Selma, Rabbi Heschel taught us that Jewish prayer, and all of Judaism, is the spiritual practice whereby we take our Jewish souls and bring them into action, to engage right here with all the parts of the world that are not yet whole, not yet fully good and just, not yet in the Divine image.  Praying with our feet means never forgetting our Jewish sacred otherness, and leveraging that otherness to act for what is right.

To pray with our feet means to live in a uniquely Jewish way of being morally awake:  it’s not enough for us to be awake to the reality of racism and bigotry in our society.  We must, in addition to all that, awaken to the fact that to be Jewish is never to fit into normal categories and norms of society.  To be awake as a Jew means that we know, inwardly, that our Jewishness–our Jewish struggle to justice–is an identity that is infinitely more significant in how we live, and in what choices we make, than the color of our skin.  To be awake as a Jew means that those of us who happen to have white skin and white privilege–we’d better use that privilege for the sake of justice; we had better use that privilege to leverage our power and influence for the sake of all those upon whose backs this country was built.

This, to my mind, is what it means to be an identity called  “American Jew” in the 21st century:  God has given most of Ashkenazi Jews, by virtue of their skin, reasons for glory and for arrogance.  Now we must take the gifts we have been given and transform them into the real glory, which is to humbly use our American power in the service of those who have been denied that power for centuries.  Yes, there are rising threats to us as Jews, and we must, of course, take care of our own.  But this in no way relieves us of the obligation to act for justice for all those in our beloved America who deserve it.  In other words, this is the “cost” of our privilege of having an “American Jewish” identity.

We American Jews have so much to be proud of in all our accomplishments.  But we must not get complacent with what makes us special.  As the blessing of the Torah says, v’chayey olam natah betocheinu, that God has planted the seeds of a fully alive and renewed world within us:  our gift of being Jewish lives as a potential within us that we must make whole and real in the world by praying with our feet, by bringing what lives only as potential in our souls out into this world.

May we, in our world, in our generations, show the world truly why we Jews have been such an ageless people–let’s share with our country and the world our Jewish vision of a repaired, perfected world of justice–so that no act of brutality and hatred ever again be perpetrated against people of color in this land.  In this way, may the blessings we Jewish people have become a gift that blesses all the families of the earth. 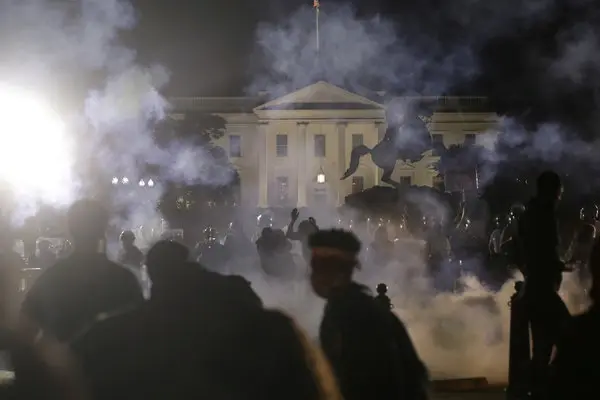