At first, it could have been just another Jewish program on Zoom during a pandemic. But as the screens and faces popped into the meeting, it immediately became clear that this wasn’t a conventional Jewish gathering. There were faces of individuals who were wearing special glasses and hearing devices. There were faces of Black people. Asian people. There was a woman seated in a wheelchair. There was a married couple of two men seated together. Some of the faces didn’t read as “unusual,” but when they spoke, they shared stories of feeling sometimes painfully different than the mainstream in their synagogues and other Jewish spaces. Some shared stories of having invisible disabilities, or non-heteronormative identities that often led people to misunderstand and even mistreat them. Some told stories of hiding their identities for fear of being exposed. Others talked about how hiding their identities was impossible because of the color of their skin.

The meeting was a special, culminating event of the Jewish Identity Institute called “Re’echa Kamocha,” “Your neighbor as Yourself,” taken, of course, from the line in Leviticus 19:18, “…You shall love your neighbor as yourself.” For one evening, Jewish people who don’t fit conventional definitions of “typical” Jewish community members gathered to share both the commonalities and the differences in their Jewish journeys. The Jewish Identity Institute is a pilot program that began this year, comprised of  three separate cohorts –Jews of Color, LGBTQ Jews, and Jews with Disabilities. For five months, the three cohorts met separately, creating community and connection among themselves as they shared their personal stores, explored the intersections between their personal identities and their Jewish identities, and discussed together how the Jewish community can learn from their experiences. At the final “Re’echa Kamocha” event, all three cohorts joined together to share their intersecting stories, struggles, and dreams for a better and more inclusive Jewish community.

The idea of the Jewish Identity Institute developed out of a conversation I had with disabilities rights activist and leader, Judith Heumann. I described to Judith my ongoing work with the Hineni Fellowship for LGBTQ Leadership, which develops Jewish community leaders from the LGBTQ community. I talked about how, at Hineni, we explore the intersection between our queerness and our Jewishness. In particular, we explore how the status of “other” is so central in both LGBTQ and Jewish identity. Judith remarked how otherness naturally plays a central role in disabilities identity, and we got to thinking about how important it would be to bring together members not only of the LGBTQ and disabilities community, but other marginalized groups within the wider Jewish community. From this conversation, the Jewish Identity Institute was born.

The idea behind the Jewish Identity Institute is not simply to bring together marginalized Jewish cohorts to share stories and experiences. It is founded on a premise I discovered in my work with the LGBTQ community in the synagogue world. Namely, it’s not enough for synagogues and other Jewish institutions to unilaterally decide that they are now “inclusive” because they mean well and genuinely want to include previously marginalized Jews in their activities and leadership. Instead, synagogues and Jewish institutions can be called inclusive only when previously marginalized individuals themselves declare their institutions to be inclusive. The Jewish community needs a central location, a hub where marginalized Jews can come together, find strength in numbers, and have their voices amplified to speak to the wider Jewish world and show the way forward to becoming more inclusive. In this way, the Jewish Identity Institute is an incubator not only of community, but of a vision for a  truly rich and dynamic Jewish world, one that listens to and grows from the insights and experiences of all of its diverse members.

Along with myself leading the LGBTQ Jewish group, Rabbi Lauren Tuchman, a leader in the Jewish and disabilities rights activist community, headed up the Jews with disabilities cohort. Sabrina Sojourner, a Jewish communal leader and social justice activist, headed up the Jews of Color group. Throughout the program, we led our groups into deep-dive conversation about the meaning of Jewish identity in our time. We explored our cohort identities, and found the intersections, as well as the disparities, between our cohorts and our Jewishness. And through our explorations, we sought to garner our collective insights on how our Jewish community can learn from our experiences for the better.

When all three cohorts came together, what immediately became apparent was how the boundaries between the cohorts were extremely porous. There were queer Jews in all three cohorts, as well as Jews of color and Jews with disabilities represented across the board. And yet, for various reasons, certain dimensions of our identities become primary when we confront our Jewishness and the ways the mainstream Jewish community has sought both to otherfy us and to include us at different times in our lives. What also became apparent was how powerful and moving it was for us to have an articulated Jewish space for us to assert, explore, struggle with, and bask in our unique kinds of Jewish identities.

If any message for the Jewish community rang out loudest and clearest from the Jewish Identity Institute, it’s our deepest desire to be truly seen and heard for the uniqueness of our struggles, our strengths, and our hopes for connection as the unique kinds of Jewish people we are. It’s the need for those with privilege within the Jewish community to very consciously and intentionally create a culture of deep listening and responsiveness to our stories and our journeys. We need for the community not only to welcome us, but to challenge us to rise to leadership and help to bring other Jews along into the wonderful ways that we see the world. We need our rabbis and other community leaders to spearhead a culture of genuine inclusiveness–one that starts by listening to our marginalized members rather than simply giving lip service to progressive values.

Finally, there’s a beautiful and ironic message that rises up from the Jewish Identity Institute.  That message is that the very ‘otherness’ that we might feel because of the color of our skin, our disability, or our sexual or gender identity–this very otherness is also the place where we are the most Jewish!  To be Jewish is never to fit into the neat boxes and categories that the world so desperately wants to fit humanity into.  So often stripped of power, dignity, and centrality on the world stage, our very vulnerability as Jews has been the source of our greatest moral and spiritual strength through the ages.  As Jews of Color, Jews with disabilities, and LGBTQ Jews, we never lose this sense of otherness, even as other members of our Jewish community might forget this critical feature of Jewish identity.

The power of the Jewish Identity Institute, it’s great potential, lies in its ability to bring all the Jewish people back to the place where we celebrate our otherness, and grow in our collective Jewish identity by welcoming and  learning from the otherness of each of our community members. The hope and dream of the Jewish Identity Institute is to expand the circle of those participating in future cohorts and gatherings, and to develop clear directives and pathways of inclusion and leadership so that the blessings of the Jewish community can truly be owned and celebrated by us all. 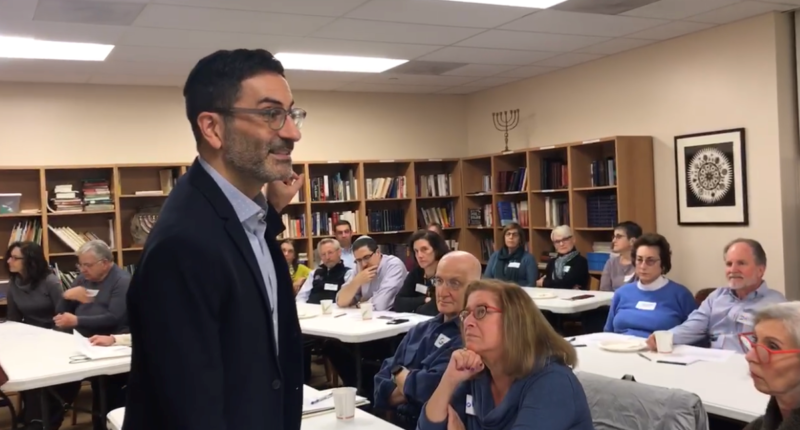