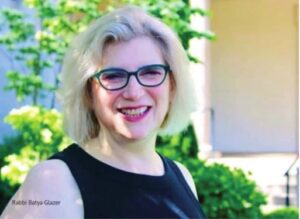 Three Montgomery County synagogues have combined their religious schools, bringing 110 students together under a single roof in the fall. The three participating synagogues — Kol Shalom and Tikvat Israel Congregation in Rockville and Shaare Torah in Gaithersburg — formed B’Yachad Community Religious School, and hired Rabbi Batya Glazer as director. Glazer was a staffer for the Jewish Community Relations Council of Greater Washington from 2009-2018.

Glazer said one goal of the school is to make students comfortable in both their own synagogues and the Jewish community at large, which will teach them how to shift from identity to identity.

“Your synagogue is home. But sometimes you go to another shul, and that’s your community, too,” she said. “Different affiliations are meaningful, and for the kids” who will attend B’Yachad, the mixing of synagogues “is a tremendous opportunity.”

“It’s a great opportunity for students to enhance their Jewish experiences by getting to know students from other communities,” said Rabbi Annie Lewis of Shaare Torah.

But the rabbis of three congregations will be available to teach, which Glazer called “a tremendous brain trust.”

Between the three synagogues, there always will be someone with specialized knowledge, Lewis added.

Classes will meet at Shaare Torah during the first half of the school year, then switch to Kol Shalom. Special events will take place at Tikvat Israel. Students will have the option of attending via Zoom.

Regardless of current plans, the school will follow Montgomery County recommendations should the pandemic worsen, Glazer said.

The three synagogues will combine other resources and spend fewer dollars on staff and security. That savings is not the reason the synagogues created B’Yachad, said Deb Finkelstein, executive director at Kol Shalom.

While combined religious schools have a long history, B’Yachad is also a product of the pandemic, Finkelstein said.

Before the pandemic, Kol Shalom and Shaare Torah had begun joint programs. “We have a small school. They have a little bit larger school,” Finkelstein said. “Then COVID hit and nobody was driving.”

With travel time down to zero, the two Conservative synagogues combined classes on Zoom. Then they began to discuss whether they would still want to meet together once the pandemic ended.

Finally they decided to establish what became B’Yachad. Glazer applied for the director’s position and was hired, Finkelstein said.

The school was not set up as a separate financial entity, said Glazer, who was ordained at the Conservative movement’s Jewish Theological Seminary of America, where she also studied at the William Davidson School of Jewish Education.

“We are not a 501(c)(3),” she said. “My contract is held by Shaare Torah, with oversight by a committee of the three congregations. Everyone will contribute to the budget.”

Finkelstein said Glazer will bring her Jewish education and community-building backgrounds to her position.

B’Yachad “is something that is going to lift up all our communities together,” after a difficult year in which the schools were confined to Zoom, Lewis said.

Rabbi Marc Israel of Tikvat Israel said he was particularly attracted to the idea of a Jewish partnership by the three synagogues.

The Conservative synagogues “share about 95 percent of the same goals,” Israel said. So why should each hire a professional educator when “we can have a person who can run a program that can serve all three.”

The program’s advisory committee consists of rabbis, executive directors, board members and parents from the three synagogues. Another committee with the rabbis will be involved in developing appropriate programs and curriculum, Glazer said.

If not already participating in a combined school, synagogues were protective of their members and strove to keep them. Under this new program, the families can remain involved in their home synagogue but become part of the family of the others.

“We all want our kids to feel committed and grounded,” Glazer said. “We also want them to understand they are part of a bigger Jewish community.”